The Company has a single series of shares, and each share entitles its holder to one vote at the General Meeting of the Company. The Company’s shares have no nominal value. All Caverion shares carry equal rights to dividends and other distributions by the Company (including the distribution of assets upon dissolution).

The aim of Caverion’s dividend policy is to distribute at least 50 per cent of the result for the year after taxes, however, taking profitability and leverage level into account. Even though there are no plans to amend this dividend policy, there is no guarantee that a dividend or capital redemption will actually be paid in the future, and also there is no guarantee of the amount of the dividend or return of capital to be paid for any given year.

In accordance with the Finnish Limited Liability Companies Act, the Annual General Meeting decides on the distribution of a dividend on the basis of the Board of Directors’ proposal. Dividends are generally paid once a year and may only be paid after the Annual General Meeting has adopted the Company’s financial statements for the year in question.

The Annual General Meeting held on 25 May 2020 decided that no dividends will be distributed based on the balance sheet to be adopted for 2019 by a resolution of the Annual General Meeting, but that the Board of Directors be authorized to decide at their discretion on the distribution of dividends of a maximum amount of EUR 0.08 per share from the Company’s retained earnings.

The historical dividends paid have been presented below. Our Total Return Calculator can be found here. 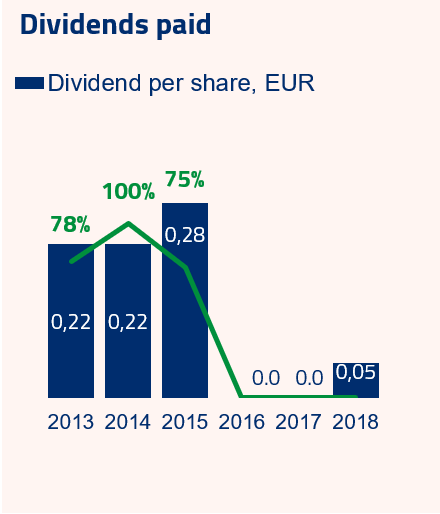