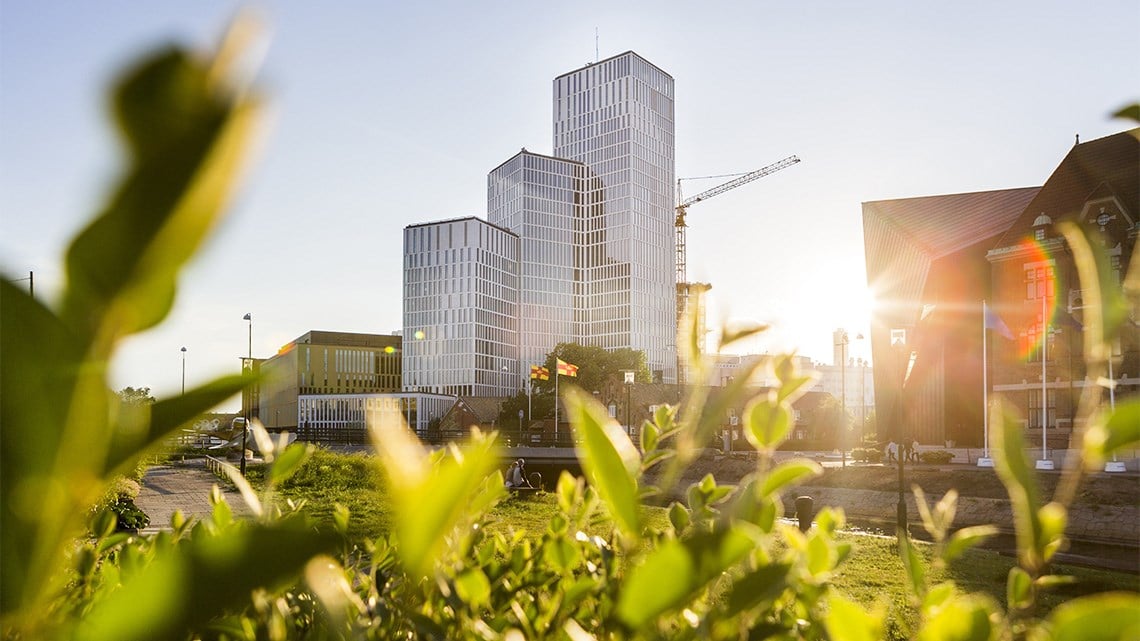 Continued improvement in profitability and strong increase in order backlog

Unless otherwise noted, the figures in brackets refer to the corresponding period in the previous year.

“I am satisfied with our profitability improvement continuing according to plan in the third quarter of 2021. A highlight of the quarter was that our order backlog grew strongly both in Services and Projects compared to the previous year. This provides a solid foundation for profitable growth in the future. However, our revenue decreased seasonally in the third quarter as the new orders booked in the order backlog did not yet materialise in revenue. Our cash flow was also lower in the first nine months of the year. Our working capital was impacted by higher receivables, lower advance payments from new projects and our existing older projects being in a cash-consuming phase. Due to the different impacts of the corona pandemic on the third quarter this and last year, a revenue comparison between those quarters is less informative than in normal years. It is positive to see that most economies are now finally returning more back to business as usual.

In the third quarter, our order backlog increased by 16.1 percent to EUR 1,889.7 (1,627.7) million compared to a year earlier and by 5.6 percent compared to the end of the second quarter (EUR 1,789.0 million). The order backlog continued to increase in Services, up by 15.2 per cent. Now also the Projects order backlog was up by 17.2 per cent. It typically takes a few quarters before the growth in order backlog realises in revenue growth. Our third quarter revenue was EUR 493.7 (515.5) million, down by 4.2 percent or 4.9 percent in local currencies. Measured in local currencies, the Services business revenue declined by 0.8 percent and the Projects business revenue by 11.6 percent in the third quarter. The business mix change seen in recent years follows our plans; the Services business accounted for 65.1 (62.6) percent of Group revenue in January-September 2021.

We continued to improve our profitability in the third quarter. Our third quarter adjusted EBITA improved to EUR 21.5 (21.2) million, or 4.4 (4.1) percent of revenue. EBITA was EUR 17.7 (17.7) million, or 3.6 (3.4) percent of revenue. I am particularly happy about the positive progress which has continued in our divisions Industry, Germany, Norway and Sweden. In Services, the performance continued overall on a strong level year-to-date. There was a minor negative impact from increased material prices in the third quarter. We continued to see an increased interest towards those parts of our lifecycle offerings that help customers make their operations more efficient and predictable as well as improving their sustainability. In Projects, market demand started to pick up following the stabilisation seen in the second quarter. The finalisation of the last remaining major risk project will take until the end of the year and we continued to improve our profitability in Projects. I trust that our professional employees together with our focus on sustainability and digitalisation will enable us to continue improving our performance going forward.

Our operating cash flow before financial and tax items was EUR 27.1 (76.3) million in January-September 2021 and the cash conversion (LTM) was 96.4 (138.2) percent. Following a lower cash flow in the third quarter, we expect a strong cash flow in the fourth quarter. Our liquidity position is strong and our leverage is at a low level. At the end of the third quarter, our interest-bearing net debt amounted to EUR 185.0 (187.5) million, or EUR 56.0 (55.3) million excluding lease liabilities. The net debt/EBITDA ratio was 0.9x (0.8x). Our cash and cash equivalents were EUR 81.5 (84.8) million. We completed three bolt-on acquisitions in the quarter and continue to actively search for suitable acquisitions going forward.

After starting as Caverion’s CEO in early August, my first impression of the company is that our business has clear opportunities going forward. Our people have great skills and capabilities throughout our divisions. We are currently working on our future strategy up to 2025 and expect to finalise this work during the first half of 2022. We expect market demand to pick up in the next few years and we strongly believe in our purpose to enable building performance and people’s wellbeing in smart and sustainable built environments.“

During the third quarter, the delta variant of the corona pandemic still impacted the business operations negatively, particularly in the first two months of the quarter. The operating environment started to improve at the end of the quarter due to the broad coverage of the corona vaccinations. Many governments also started to lift the various restrictions related to the corona virus in September, while at the same time finalising their plans to support the economic recovery.

During the first nine months of the year, the building technology market was impacted by increases in material prices. There have also been supply shortages and delays in some areas. Caverion has proactively taken various measures to optimise the supply chain and to manage pricing.

In Services, Caverion has experienced increased investment activity among several customer segments as of the second quarter. As an example, certain annual industrial shutdowns in Finland postponed from last year took place in the second quarter of 2021.

Caverion has started to see a general increasing interest for services supporting sustainability, such as energy management and advisory services, driven by regulation and the expected governmental and EU stimulus packages supporting investments in green growth.

In the third quarter, there was still some negative impact from corona in a year-on-year comparison.

In Projects, market demand overall continued on a lower level in the first nine months of 2021, although there were clear signs of market stabilisation as of the end of the second quarter. In the third quarter, market demand started to gradually pick up also in Projects.

During the first nine months of the year, the market was impacted by increases in material prices.

Stimulus packages did not yet have a clear impact on general demand in the first nine months of 2021.

Caverion expects market demand to be overall positive in Services and to improve also in Projects during the end of 2021. This scenario assumes a successful outcome from the ongoing corona vaccination programmes and continued control of the corona pandemic with no significant unforeseen setbacks in 2021. Increased material prices and longer delivery times may still affect Caverion’s business going forward.

The business volume and the amount of new order intake are important determinants of Caverion’s performance in 2021. A negative scenario whereby the corona pandemic continues longer than currently anticipated, due to for example potential new corona variants, can still not be ruled out. Nevertheless, a large part of Caverion’s services is vital in keeping also critical services and infrastructure up-and-running at all times.

The monetary and fiscal policies currently in place are clearly supporting an economic recovery. As an example, the economic stimulus packages provided by national governments and the EU are expected to increase infrastructure, health care and different types of sustainable investments in Caverion’s operating area over the next few years. The main themes in the EU stimulus packages are green growth and digitalisation. Caverion expects the national and EU programmes to increase demand also in Caverion’s areas of operation as of the end of 2021.

The digitalisation and sustainability megatrends are in many ways favourable to Caverion and believed to increase demand for Caverion’s offerings going forward. The increase of technology in built environments, increased energy efficiency requirements, increasing digitalisation and automation as well as urbanisation remain strong and are expected to promote demand for Caverion’s services and solutions over the coming years. Especially the sustainability trend is expected to continue strong.

Increasing awareness of sustainability is supported by both EU-driven regulations and national legislation setting higher targets and actions for energy efficiency and carbon-neutrality. This is furthermore supported by the society end-users’ general request for environmentally friendly built environment. The Energy Performance of Buildings Directive (EPBD) passed by the EU requires all new buildings from 2021 to be nearly zero-energy buildings (NZEB). Other initiatives include the “Fit for 55” climate package and the Renovation Wave Strategy. The “Fit for 55” climate package proposes to make EU's climate, energy, transport and taxation policies fit for reducing net greenhouse gas emissions by at least 55% by 2030, compared to 1990 levels. The objective of the European Commission’s Renovation Wave Strategy is to at least double the annual energy renovation rate of residential and non-residential buildings by 2030. Mobilising forces at all levels towards these goals is expected to result in 35 million building units renovated by 2030. The increased rate and depth of renovation will have to be maintained also post-2030 in order to reach EU-wide climate neutrality by 2050. Caverion has been putting an effort to develop its offering and solutions to meet this demand and is well positioned with its approximately 15,000 employees.

Caverion’s external loans are subject to a financial covenant based on the ratio of the Group’s net debt to EBITDA. The financial covenant shall not exceed 3.5:1. At the end of September, the Group’s Net debt to EBITDA was 0.9x according to the confirmed calculation principles. The confirmed calculation principles exclude the effects of the IFRS 16 standard and contain certain other adjustments.

The Group’s operating cash flow before financial and tax items decreased to EUR 27.1 (76.3) million in January–September and cash conversion (LTM) was 96.4 (138.2) percent. Cash flow was lower in the first nine months of the year. Working capital was impacted by higher receivables, lower advance payments from new projects and our existing older projects being in a cash-consuming phase.

The Group’s working capital improved to EUR -101.7 (-94.5) million at the end of September. There were improvements in all divisions except for Norway, Finland and Germany compared to the previous year.

There have been no material changes in Caverion’s significant short-term risks and uncertainties compared to those reported in the Board of Director’s Report presented in the Annual Review of 2020. Those risks and uncertainties are still valid. After this, the lack of availability of materials and supply and the increase in material prices have been identified as new short-term risks. In addition, there is a risk that the rising energy prices and possible problems with the availability of energy may impact the operating environment in the near future. Increased material prices and longer delivery times may still affect Caverion’s business going forward.

Read more about risks and our risk management

IMPACT OF CORONA PANDEMIC ON CAVERION

At the end of the third quarter, the effects of the corona pandemic gradually started to ease off and the operating environment generally improved. The ongoing corona vaccination programmes have provided a helping hand seen in the lower number of severe COVID-19 cases. Despite the positive developments, Caverion remains somewhat cautious with the pandemic as unpredictable virus variants and new waves of the pandemic may continue to emerge.

Caverion’s business is exposed to various risks associated with the corona pandemic and the economic downturn. These include, for example, suspension or cancellation of existing contracts by customers, lack of demand for new services, absenteeism of employees and subcontractor staff, closures of work sites and other work premises by customers or authorities and defaults in customer payments.

The business volume and the amount of new order intake are important determinants of Caverion’s performance in 2021. A negative scenario whereby the corona pandemic continues longer than currently anticipated, due to potential new corona variants, can still not be ruled out. Nevertheless, a large part of Caverion’s services is vital in keeping also critical services and infrastructure up-and-running at all times.

Caverion expects market demand to be overall positive in Services and to improve also in Projects during the end of 2021. This scenario assumes a successful outcome from the ongoing corona vaccination programmes and continued control of the corona pandemic with no significant unforeseen setbacks in 2021.